Taken out of Context Samantha and I had the pleasure of visiting the great city of New Orleans over this spring break.  Despite battling through a sinus infection (Samantha) and some sort of throat nastiness (me), and being the least partying people in the French Quarter (in bed by 10:30), we had a great time experiencing the sights and sounds of the Crescent City.

One of the unexpected gems during our brief vacation was the Voodoo Tour.  We made reservations with Tree (yes, his name) of Racontours, billed on Tripadvisor as the number one tour in the French Quarter.  While occasionally a bit of a rogue, Tree’s colorful character danced our small group through the French Quarter, delighting us with the rich history of the former French and Spanish colonial periods.

I expected a New Orleans Voodoo Tour to aggrandize the stereotypes associated with the practice.  I anticipated bloody stories of animal and human sacrifices, of voodoo dolls and their unassuming victims, of black magic and demons.  I was wrong.  So many of my assumptions fell flat, no more than uninformed drivel handed to me by pop culture.

Voodoo at its roots worships ancestral spirits.  Certain spirits have gained a reputation for answering particular prayers, and those have gained more of a following than others.  Voodoo dolls are a way of inviting healing powers and luck into your life.  They can also be used as a way to extrinsically work out personal grudges without bringing actual harm to others. Louisiana Voodoo adopted many Catholic elements in the 1800s through the teachings of Voodoo Queen Marie Laveau.  A devout Catholic herself, Laveau drew her Voodoo followers into the church by drawing comparisons between the Voodoo’s spirits and the Cult of the Saints.  The Voodoo spirit of Legba fulfilled the same role as St. Peter - holding the keys to heaven.  Aida Wedo and the Blessed Virgin, Ghèdè and St. Expeditè, Ogun and St. Jude, all merged.  Marie Laveau taught that they were expressions of the same forces, the same spirits, and praying to one would mean praying to the other.

Taken out of context, glorified for entertainment value, Voodoo makes for good horror.  At its core, practiced in its intended form, Voodoo expresses an adapted version of an ancient tradition passed down by word-of-mouth through many generations by people struggling to live through more hardship than you or I could imagine.  Essentially, Voodoo helps people to find spiritual healing through prayer and meditation.  While its practices may appear foreign, its goals strike me as similar to every major religion I know.

Christianity taken out of context could look equally as ridiculous as Voodoo’s pop culture portrayal.  Masses of people who once a week grow hungry for the blood and flesh of their creator, who incidentally is now undead.  Zombies and Vampires?  Believe me, I don’t make this point to ridicule anyone’s beliefs, but I think the point is valid.  When taken out of context, just about anything can sound malevolent. If you find yourself in New Orleans with four or five hours to spare, jump on the Voodoo Tour with Tree.  Besides a good time with an entertaining guide, the history of the Voodoo world will unfold before your eyes in a very enlightening way.

Suffer the Children a Robotic Rhino

At this time of year, it is not hard to recall the message of Jesus Christ.  While the overly commercialized Christmas season fades in our rearview mirror, Easter rapidly approaches, still mostly safe from the industrial gift-giving machine (mostly).  Yet, in some corners, the everyday commercialization of the Word commences with seemingly unabashed fervor.

Cornerstone Church in San Antonio recently opened its newest building - a $5 million children’s center called the Ark.  Designed after the story of Noah and the Ark, the new building is meant to attract young people to the church.  You can read the news story here.

Church members expect their leaders to responsibly spend their donations.  Appropriate stewardship should lead to church growth, spreading Christ’s message of love, sacrifice, and redemption.  An innovative pastorate crafts a message that resonates in the hearts and souls of its flock.  Children come to Christ through the Word and His calling. While the design for the Ark is innovative and intended to capture the minds of children, and I do respect their creativity, I question the decision to aim for over the top extravagance.  Included in the building are sixteen life-size Ark passengers - nine of which are animatronics built by Hollywood company Animal Makers.  The rhino actually appeared in the movie “2012.”

When asked whether or not the animatronics were too extravagant, Executive Pastor Matthew Hagee’s answer raised my eyebrows:  “If casinos can build opulent buildings to incentivize gamblers to want to come and enjoy their weekend, how then can you justify not building something that would incentivize people to come and hear about the Word of God?”

I am sure Jesus would appreciate the comparison between Sin City and a house of God.  In fact, by returning to the source and consulting the Son of Man himself, it would seem that I missed the animatronic Giraffe standing behind Jesus during the Sermon on the Mount; I lost it in the small print.  Oh, and a corrected translation of the New Testament reveals that it wasn’t Jesus who over turned the money changers’ tables at the temple - it was an animatronic Rhino.

Humor aside, my point is this.  Given the right collection of messages, a pastorate who teaches parents how to lead their homes, and an appropriate learning environment, there should be no problem guiding children to Christ.  Rather than spending money on unnecessary expenditures, raise money to help people who need it.

Mr. Hagee even acknowledged the extravagance: “I don’t have any problem with somebody saying it’s over the top.”

You know who might agree with Mr. Hagee?  The more than 500 homeless children in the San Antonio area documented as of November 2012 by SAMMinistries.

What would make a larger Christ-like impact on a child’s life?  Knowing animatronics wait for you at church?  Or, knowing that a Christian organization gave you a home out of the goodness of their heart.

I think I know which one Jesus would choose.

I love to cook.  I hate to clean.  I will grudgingly clean my messes after I make them, and have recently learned to clean as I cook, which saves time in the end, but I still hate it.  Needless to say, aside from the grate, I have not cleaned my gas grill in more than a year.  Unfortunately, after all that time, the greasy build up is volatile, waiting for the right moment to ignite.

Have you ever looked down into the guts of your grill and seen the nastiness waiting below?  I use my grill frequently, and so I had more than a year of melted fat, carbonized grease, and mildly burnt meat parts, all built into a thick layer of detritus coating the bottom.  The way my grill is built, I would have to mildly exert myself to see the bottom - very mildly; the grates and the heat diffusers partially block the view.  And, I would have to be motivated to acknowledge how disgusting it is.  The grossness just gathers, fuel for a future fire.

I think the same can be said about ourselves.  If we looked deep inside, would we see the leavings of arguments unresolved, family and friend drama, social opinions we aren’t sure we really believe anymore?  These are all the elements of yesterday’s version of us.  As we grow and move towards who we are, we leave the remnants of who we were behind.  Sometimes, these little bits are just as flammable as the nast collected at the bottom of my grill.  The longer we ignore them, the more potent they become.

One of my menu items for this week was Teriyaki Chicken.  I use a recipe from my Dad, picked up from when we lived in Hawaii.  The recipe is simple.  Combine soy sauce, a homemade weak simple syrup, white onion, ginger, and garlic into a marinade.  Marinate chicken thighs and drumsticks overnight.  Grill.  Be prepared for flareups from melting chicken fat and dripping juice (the sugar).

We are usually ready for personal flareups.  We know how to put out small fires and handle small dramas life throws at us.  Every once in a while a larger piece of our past catches on fire, but we deal with these as they come.  We don’t think about everything else lining the bottom, waiting for the big explosion. 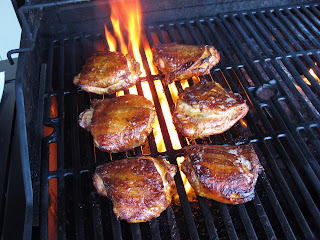 The small flames are expected and manageable.  With a squirt here or a squirt there, I put out the fires quickly.  If they flare up too much, I move the piece of chicken.  This particular batch seemed to flare up quite vigorously, so I moved the chicken into the open spots between heat diffusers.  The grease and fat still dripped, but it fell in the depths of the grill instead of onto the diffusers right below.  Any flareups would be away from the chicken and wouldn’t lead to charred meat.  Smart right?

Well, this plan, while seeming intelligent at the time, didn’t end up that way.  See, the chicken still dripped.  And there were still some flareup on the grate and on the diffusers, just not as many.  And I still sprayed them with the squirt bottle.  And the water from the squirt bottle would scatter the flaming grease, knocking it to the bottom.  Where it would land on freshly dripped grease.  Where it would flare.  And ignite a year’s worth of fuel. Have you ever seen a grease fire?  It is quite magnificent.  The way it ignores water as if it isn’t even there.  The way it just bigger as it finds more fuel, burning through a year of my laziness.

I have seen some spectacular meltdowns in my life and participated in a few.  People who haven’t dealt with their own issues, burying them deep below the surface, hoping they won’t ever ignite again.  I can remember doing the same thing beforehand.  Leaving them there, ignoring the need for a resolution, creates a flammable situation, sure to explode some point down the road.

After emptying my squirt bottle to no effect, I ran inside and grabbed the baking soda and dumped it on the flames.  It wasn’t enough.  Thankfully, we had a second box and I doused the remaining flames with the white powder.  My hand has now been forced.  If I plan to use my grill again, I have to clean it.

We can never plan for the explosion, preparing before hand to manage it.  All we can do is deal with it when it arrives.  Avoid burying issues; deal with them instead.  Look deep, clean out the garbage, take care of yourself.  Avoid the fire before it happens.

About my meal?  Don’t worry.  I took the chicken off before putting out the fire.  It was delicious

Posted by Frank Chambers at 10:44 AM No comments: