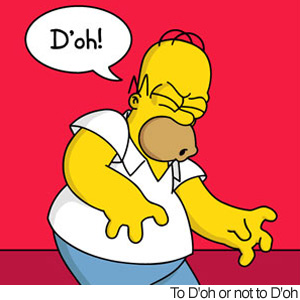 Every so often we do dumb things.  Most of us commonly share the Homer Simpson experience of slapping our forehead and saying “Doh!” because of some silly, simple error.  Most often, these moments are preceded by an uncalculated, rash act.  This is what happened to me today.
If you are a relatively new reader, you might not know that I like to ride a road bike.  Lately my schedule has only allowed me weekend forays on the bike and I usually keep my rides to an hour or so.  Personally, I love the feeling of flying down the road, in and amongst nature, with the warmth of the sun and the cool breeze playing counterpoint to each other.

My normal ride takes me out of my neighborhood, down a slightly busy street, and into Bender’s Landing, a nearby burb whose wooded half and full acre plots sport a variety of architectural styles ranging from glorified row house to neo-mid-century suburban castle, from transplanted ski lodge to Mississippi plantation.  I love looking at the eclectic mix of homes as I press myself to push my pace, streaking by man-made lakes mixed with virginal nature.  The roads are well maintained and nearly traffic free, the trees provide shade without blocking the breeze, and the options for longer rides are plentiful with just an easy right or left turn.
In my nearly three years of riding, luck rides with me - I have never been injured.  Until today.  Now, there are many ways a bike injury occurs.  Collision with another object - animate or inanimate.  A surprise wind gust throwing off your balance.  An unfortunately placed speed bump.

My injury was none of these.  Most injuries occur as a result of something unforeseen.  Mine could have very easily been prevented had I just thought out my actions.
I had just left my neighborhood and was traversing Riley-Fuzzel Rd. (soon to be the Grand Parkway).  The two lanes of traffic each way are easily escapable thanks to a wide paved shoulder.  Frequently, to a cyclists chagrin, the shoulder becomes the repository for road waste - tire bits, broken taillights, periodic trash (Don’t Mess With Texas!), and broken glass.  I usually do well to avoid to obstacles, keeping my eyes ahead, but today I rode through a pocket of broken glass.
One of the first lessons I learned while riding the bike is to keep the tires free of broken class - duh, right - so I did what you are supposed to do.  I leaned forward and, using the portion of my glove between my thumb and forefinger, pressed against the front tire, clearing the tire of debris.  Then, I reached behind me, just under the saddle, and did the same thing. 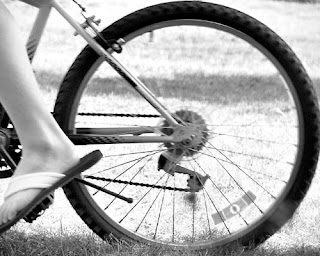 Now, those of you who ride bikes, or understand the basic laws of physics, know that when you ride a bike, the tire rotates.  When something touches a rotating object, frequently, it is influenced by the velocity of the rotation, pulling it along.  Touching a rotating bike tire is no different.  When clearing the front tire, I did what I was supposed to do - I pressed my glove against it just past the prongs, making sure my hand was pulled away from them.  On the back, because I didn’t think, I just acted, I touched behind the prongs.  In a fantastical display of the laws of physics, the tire pulled my hand along with it, cramming it into the gap between the tire and the back prong.  Of course, I was still moving (and in fact pedaling), meaning the tire kept moving in the same direction, despite my hand being in the way.  Finally, after the surprise ripped away, I yanked my hand out and continued my ride.
My glove protected most of my right hand, but I still managed to tear the skin off in a couple of places and give myself friction burns on others.  For a musician, it could have been much worse.
Make sure to think before you act.  It doesn’t matter if you are riding a bike, in the middle of an emotionally charged argument, or pursuing a like changing decision, always give consideration to the results of your actions.  I learned an important lesson today (one I am certain I have been taught before), but I know, had it been any number of other situations, the results could have been much more dire.  Take it from me: don’t get burned.
Posted by Frank Chambers at 2:41 PM No comments:

One of my favorite shirts is a striped polo from Banana Republic the salesman practically guilted me into buying.  As I headed back to the fitting room to make sure the shirt would actually fit my odd frame (wide shoulders, narrow chest), the salesman made a witty comment about how cheap it was - $7 - and how I would be an idiot not to buy it.
My $7 shirt has been great.  It is comfortable to wear, breathes well in the Houston heat, fits me comfortably, and works well within my seasonal clothing rotation.  But, a few months back I had an unfortunate lunch incident involving guacamole, which left the mostly white surface blemished with a few greenish splotches.

I used a Tide-to-go pen, but I think it was old, and only served to smear around the green color, expanding the blobs beyond their original borders.  I used stain removers at home before washing it, but to no avail.  I bleached it.  I used Samantha’s Mary Kay Oil Free Eye Makeup Remover (which is great at getting set in stains out, by the way), but even it was not successful.  I never dried it in the dryer, working to prevent the heat from setting the stain, but no matter what I did, it wouldn’t go away.
So, it sat on my dryer for weeks and weeks.  Finally, I got tired of it sitting there, so I washed it one more time.  Then, clenching my jaw as I did so, I tossed it into the dryer.  When I took it out, the stain was gone.  I don’t know how.  I don’t know why.  I just know it is a clean white surface again, graced only by the thin green horizontal stripes that drew my attention in the first place.
So . . . this is the point I could wax rhapsodic about the values of patience and never giving up, but I won’t.  I’ve played that song before.  I want to talk about has happened every time I have worn the shirt since.

I have gotten to the point where I don’t cringe any longer when I reach into my closet to grab my favorite shirt, certain that this time, when I remove it from the plastic hangar, the green, faded avocado tinge would have returned again, mocking me with its longevity and staying power.  But, every time I wear it, I still expect to see a hint of the stain, a faint, shadowy reminder of my clumsiness when eating.  It doesn’t matter if I catch sight of myself in the mirror, or glance down when driving, my brain constantly plans on seeing my stain.
I am glad it is gone, but I had become so used to seeing the stain sitting there upon the white fibers that my expectations became dictated by my past.  I have somehow become trained to expect the worse when I glance at my shirt.  But, I should not.  I know  my reality isn’t dictated by my past experiences, but, for some reason, I can’t bridge the gap created by that stain.  Keeping my stain free vision in mind, I know I can correct my expectations, keeping them in line with reality.  It simply takes persistence and correct mental positioning.

Anytime I walk into my closet, reach up and grab the white sleeve, I do so with the knowledge it will be blemish free this time, freeing me from the discouragement I have experienced in the past.

Your own personal disappointments and discouragements work the same way as that stain.  Just because circumstances worked out one way in the past doesn't condemn you to repeat them in the future.  We are not Bill Murry in Groundhog Day, repeating the same day over and over.

Now, though my brain isn't quite over the stain, whenever I don the $7 Banana Republic polo, I am reminded that every day is a new one.  I have the opportunity to experience a different reality this time.  I am not condemned to wear a stained shirt every single day.
Posted by Frank Chambers at 6:54 PM 1 comment: