This week has been filled with the Grinch.  One of the pieces the top band is doing for their Christmas concert is a reading of How the Grinch Stole Christmas

with band accompaniment.  We are bringing back one of our former students, an all state Bass and vocal major, to do the reading and sing the famed “You’re a mean one, Mr. Grinch

In addition to the Grinch filled office at work, the cartoon has been on TV at home, the song has been playing on the radio.  To top it all off, I arrived home one night after work to find some neighbors installing a new decoration in their yard.  This 12 foot fake tree  flashes in time to music.  What did my neighbors choose to use as inspiration for the flashing tree

So needless to say, I got plenty of the Grinch this week.  I have felt like the universe has put the Grinch in my path at every turn; perhaps I should pay attention. 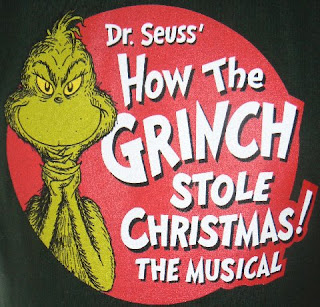 Let’s consider the story of the Grinch.  He detests Christmas, loathing it with his entire being.  The Grinch gets it in his head to prevent Christmas from coming for the Whos down in Whoville.  His master plan - dress like Santa, sneak in to the village, steal everything Christmas from gifts to food to decorations.  The Grinch’s plan goes off with resounding success.  As the Grinch is preparing to dispose of Whoville’s Christmas, he hears a sound from below - all the Whos of Whoville singing together a song of Christmas.  The Grinch realizes that Christmas is not about the gifts, the decorations, or the meal, its about the spirit.  The redeemed Grinch swoops back in to Whoville, restoring the stolen Christmas celebration.

As my week has been inundated with the Grinch and his too small heart, I have had plenty of time to think about exactly what the story means.  Our society tends to lose sight of the true meaning behind Christmas.  As the decorations come flying out at the stores immediately following Halloween, we are urged to start our buying frenzy, paying homage to the god of consumerism.  Children eagerly build their gift lists, credit card balances are double checked, and the sales begin.  We plan our dinners and parties, we decorate our homes, sometimes going overboard with our house and lawn decorations (i.e. Grinch playing Christmas tree), we buy new CDs with our favorite Christmas tunes.
All of this is what the Grinch attempted to steal from the Whos.  Consider if you had been the victim of the Grinch’s malice.  How would you react?  Would you react the same way as the Whos?  I worry that the majority of America would not choose to band together in voice and song.  Why did the Whos make this choice?  They believed the meaning of Christmas was out of reach of the Grinch.  He could steal anything and everything they had, and Christmas would still come because Christmas was inside.  The Whos’ Christmas was a celebration of family, of tradition.  Their revelry was not in the physical items, but in the spiritual connection they shared with each other.  Even though their Christmas items were stolen, their Christmas was not.
I feel that if we can keep our focus on this meaning of Christmas, instead of what the malls want us to focus on, our season will be a happier one.  Celebrate your friends and family, find happiness in companionship, treasure the moments the universe brings you that are without physical attachment.  Find the place the Whos know and join them there.  If you encounter a Grinch this Christmas season, instead of succumbing to their negative presence, choose to be positive.
In the face of peace and happiness, the Grinch had no choice but to succumb to the Whos’ Christmas spirit.  Regardless of the rot and corruption in his soul, the evil and hate in his heart could not resist.  The Grinch was touched, his heart grew, and he returned Christmas to the Whos.  This season, the best gift you could give could be to a Grinch in your life.  Give your Grinch the gift of peace and happiness. Remind someone that this is a time of celebration, invite them to join in and celebrate with you.
It might be the best thing you could do all year.