I have had this blog at the top of my “to write” list for quite some time.  I finally have an opportunity to write it as the universe hasn’t seen to press more important or eager topics to the forefront of my mind today.  So, today, I step on my soapbox. 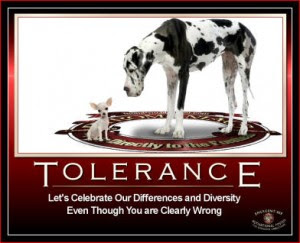 Tolerance is a term preaching from the pulpit, the politician, and the and the pundit.  We are encouraged to tolerate those who are different from us, those you might disagree with, and those with whom we are unfamiliar.  We are asked to see them for what they are and allow them to be as they are.  Through our tolerance, we are seen to welcome them into our lives.
I have to be honest with you.  I hate this word.  Tolerance has long implied to me the grudging acceptance of something we can not change.  We do not like it, never will, and so we tolerate it.  The way this word is bandied about suggests we simply ignore that which we don’t like.  Our tolerance is merely a means to achieving peace in our own life by not fighting that which we would prefer did not exist.
Dictionary.com has a few different definitions for the word tolerance:

1. a fair, objective, and permissive attitude toward those whose opinions, practices, race, religion, nationality, etc., differ from one's own; freedom from bigotry.

2. a fair, objective, and permissive attitude toward opinions and practices that differ from one's own.

3. interest in and concern for ideas, opinions, practices, etc., foreign to one's own; a liberal, undogmatic viewpoint.

4. the act or capacity of enduring; endurance: My tolerance of noise is limited.

My experience with the word, as thrown about by supposed leaders, seems to float more in the realm of definition number four.  People preach tolerance as an act of endurance.  I can tolerate flies, or screaming infants, or pain at the dentist.  Eventually, I will have a breaking point, and my tolerance will cease, morphing into something more negative and destructive.
I feel that this is the attitude we are asked to adopt as our country struggles to deal with the question surrounding homosexuality, immigration, Islam, bigotry, political division, and any sort of other potentially destructive issue.  We are asked to tolerate gays, immigrants, and Muslims.  While the voices of those imploring tolerance may have definitions one through three in mind, I fear that many hearing the word tolerance immediately jump to number four.  They feel as if they are being asked to endure.
Why is this dangerous?  The request to endure implies a defined ending.  Tolerate the gays until they discover the error in their ways.  Tolerate immigrants until they conform to our established social fabric.  Tolerate Muslims until they go away or are converted to Christianity.  Tolerate those different from us until they aren’t any more. 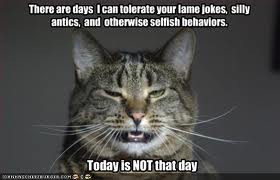 Sooner or later, those who believe in this kind of tolerance are going to learn that endurance may have it’s limits.  A gay person is just that - gay.  An immigrant may adopt some of the American aspects, but they will not abandon that which they know - there will always be immigrants.  A Muslim can not and will not disappear, and even if they are converted, their version of Christianity will retain that of their original cultural identity - they are Muslim.  There will always be those different from us.
When people realize the end of their endurance, tolerance will end.  Moments like this erupt into violence, either individual violent episodes like this week’s shooting in Arizona, more large-scale episodes like ethnic cleansing, or world wide events like World War II.  This is the eventual result of definition number four.  We are human animals, and our endurance can only be stretched so thinly.
Instead of preaching tolerance, people in positions of influence need to encourage acceptance.  Through acceptance we achieve the ideal of perfect tolerance - that listed in definition one and two.  With acceptance we can acknowledge that people are gay, and while it might be different than what you or I are, it is perfectly fine.  With acceptance we can recognize that immigrants might be different and that is good.  Their cultural experiences add to our own, and continue to build this melting pot nation.  With acceptance we see Muslims as honoring their own religion instead of attempting to steal or usurp yours.  Discover the points upon which you agree and build a relationship of trust.  With acceptance those who are different will help us discover more thoroughly that which we believe.  Differences will help question our own beliefs and either further cement them as right or divert us towards that which is more correct to our existence. 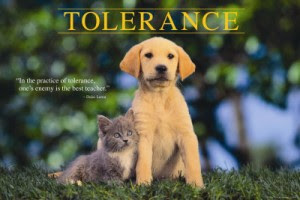 Acceptance is a powerful tool in our lives.  With acceptance, we foster peace and brotherhood, and look to move forward.  I would love to say that our nation has been forged through acceptance, but that would not be correct.  Our nation has been strong enough to endure tolerance, though at times that tolerance has threatened to rip it apart.  The same will happen in our lives if we allow it.  Look for opportunities to demonstrate acceptance and you will see opportunities in which to demonstrate love.  Tolerance is a product of self-love, acceptance is a product of selfless love.
The beautiful thing is you have the choice, the free will, over which life you would like to live.  Do you choose acceptance which loves others, or tolerance which loves only yourself?  It is tough, I know, but it is a decision worth making.  You need to understand yourself, for only then can you truly participate in peace and happiness.
Posted by Frank Chambers at 12:00 PM