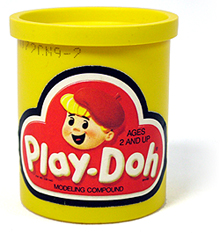 When I was little, like many people since the 1960s, I played with Play-doh.  I enjoyed clumping it up, stretching it, rolling out into long cigar shapes, building Play-doh people and dancing them around.  I am pretty sure I have probably eaten Play-doh.  In elementary school, I was excited to make edible play-doh out of honey and peanut butter.  There is part of me that wishes I could find the recipe (then I remembered the internet and looked it up - here). 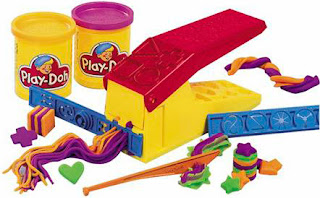 Play-doh had tools as well.  One of the most popular was one of the first - the Play-doh Fun Factory.  This extremely simple device had one function - taking your balled up mass of doh, smashing it down, and extruding it through a mold, creating all sorts of fun shapes and sizes.
For much of our lives, we are like Play-doh.  We are passed from institution to institution, social group to social group, each shaping us to their own traits and characteristics.  As we pass from each group to a new one, we take elements with us, and slowly we craft the person we will become.  These experiences are the Play-doh Fun Factories of our lives. 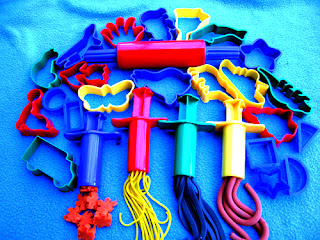 Sometimes, we feel as if we are forced into shapes and designs we would rather avoid.  Watch a school classroom.  Many of the students would prefer to be somewhere else, with different people, engaged in a different activity.  They are in school because their parents tell them they should be there or because they would get into trouble of they weren’t.  But, because they are there, through the Fun Factory they go, emerging on the other side as responsible adults ready for life’s challenges (or so we hope).
Other occasions, people attempt to force us to conform to their idea of life.  I remember as a young teacher I tried to convince all of my students that they should be a music majors and band directors.  It didn’t take very long for me to understand that we all have our own paths to follow.  Unfortunately though, sometimes we ignore our own passions and conform to the ideals of others, sometimes we express ourselves through the life we want.  Your level of happiness is determined by which side of this coin you fall. 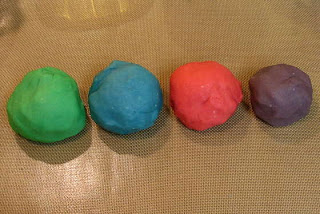 One of my readers recently expressed celebration at stepping outside of the Fun Factory.  He had been in a position where he allowed others to pressure him into a particular path, following what society demanded instead of his own heart.  He says he found “a lot of pressure to be conventional rather than doing what’s right” for him.  By choosing to determine his own path instead of allowing the pressures of his peers and colleagues to force him into a position he didn’t prefer, he chose happiness.
Many of us have gone through similar situations in life, preferring to conform rather than be different.  Instead of following our passion, we do what we think is the easiest option, finding ourselves on the path to unhappiness.  All it takes is a step back in the right direction to find ourselves again. 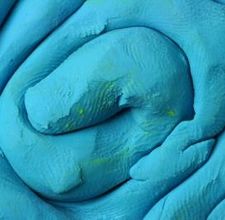 Stepping out of the box can be hard.  In my own experience, while debating the decision to leave public school teaching, I frequently considered what others would think.  I worried how my kids would feel, what my colleagues would think, how my college professors would react.  I actually avoided the topic for as long as I could with some of my mentors; I was worried I would disappoint them.  All it took was one of them (Eddie Green, for those of you who know him), to casually mention to someone that I wrote a blog, and that I would be pursuing writing instead of band directing for me to get past my fear.
It honestly floored me to know that one of my mentors, one of my heroes, knew I had chosen a different path without me saying anything about it.  Next was the realization that he wasn’t bothered by it, and in fact seemed encouraging that I would pursue something that made me happy.  From that moment on, I felt peace about my decision.
Everyone conforms in some way or another.  The Play-doh Fun Factory will have its way with us.  What matters is that you find a shape that fits you.  It doesn’t matter what shape other people have, or what shape other people think you should have.  Find your own shape and find your happiness.
Posted by Frank Chambers at 8:53 PM