The Power of Purple

As we’ve jerked and swerved through the drama of this election season, a map of the United States chopped into red and blue bits has come to define our national state of being. It would appear that this house is impossibly divided.

Our social media feeds only further corroborate this idea. The echo chamber created by Facebook’s algorithms help create a feeling of us versus them. Inflammatory articles populate our walls, angry posts rile us up, our preferred news sites spin us around and around.

I read an article on CNN today examining results of a recent poll. 85% of Americans feel the nation is sharply divided. I agree with the feeling. However, I disagree with the severity or with the apocalyptic gravitas applied to the divide. Here’s why.

Recently, a map floated across my Facebook that floored me. It was not a patchwork of antagonizing red and blue counties set starkly against each other in perpetual battle. Are you a red state or a blue state? Are you Democrat or Republican? Are you Conservative or Liberal? It is none of these because it is mostly purple. (The creator of this map has a great blog article on it). 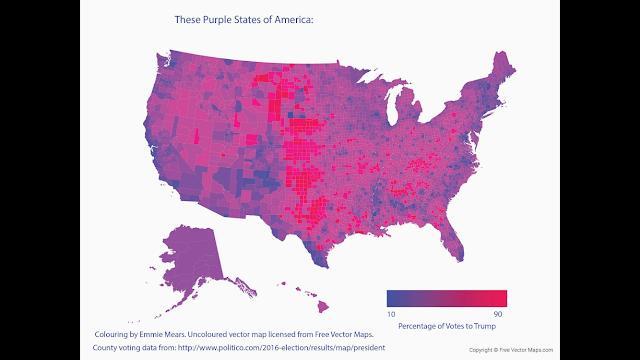 I live in a purple house. My wife Samantha and I stand on opposite ends of some issues. Most of the time our votes cancel each other out. But, we, like most of America, live in harmony. Unlike our Facebook feeds, where one group just lambasts the other, we have dialogue. Sure, there are issues we don’t agree on, but we seek to understand each other and understand the why behind our positions.

We engage, which is the most important part of this process. Facebook allows us to disengage, or semi-anonymously attack. We unfriend or unfollow people with different positions than ours. Instead, we should seek to get out there, find people who stand on the opposite side of the aisle, and make some purple.

Game theory defines the outcome of any competition as being either Zero-Sum (one winner and one loser, or a 1 or a 0) or Non-Zero-Sum (aggregate gains across all parties can be positive or minus). Our current feelings on this election can be summed up in the Zero-Sum category. Red won, blue lost.

I think this simplification is as far from the truth as we can get. In fact, that kind of thinking is dangerous and goes precisely to the heart of the concept that a house divided can not stand. If we continue to see ourselves as Zero-Sum, only winners or losers, than we risk destroying this American experiment.

A better solution is to abandon the strictly partisan rhetoric we’ve been forced to swallow through news media and social media. Do not look at your friends, family, and work associates as only Red or Blue. In conglomerate, they are purple. Most likely, if you delved into the issues with them, you would find most people are purple.

Proceed with the idea that our population is Non-Zero-Sum. We have common ground: find it. Our differences are opportunities to learn about each other. Try to understand how someone came to the decisions they’ve made. They are more than their ideas, they are the experiences that led to them. Android's "Be Together. Not the Same" ad campaign captures this idea perfectly. Personally, I've always had a soft spot for this commercial because it sums up my thoughts.

This country is a spectrum, a sliding scale, it is not binary. Of course we feel like everything is us versus them when that is how we perceive the world. Shift your thinking. Shift your perspective. Only then will you discover the power of purple.

p.s. As always, if you like my blog, I invite you to share it. Thanks!
Posted by Frank Chambers at 11:51 AM