When I was in college, the big thing was coming up with nicknames for people.  I don’t know what it was, but the idea of defining someone by one of their most surface level characteristics was fun.  Most of the nicknames I originated just popped into my head, and I ran with it from there.  Generally, the nicknames were only shared amongst a small community of friends, rarely actually making it to the ears of the nicknamed.

We named people for physical characteristics: Horse Face, The Gazelle, Big Bird.  Some were funny and harmless; we shared these.  Some were not.  Big Bird was a reasonable nickname; he was tall and lanky and his hair was blond, as close as a human can get to yellow feathers.  His attitude was even similar to Big Bird’s, light, slightly aloof, and caring.  I never knew the actual names of Horse Face or The Gazelle.  One was just a girl with a long face we saw around the music building, the other an unknown runner on a treadmill who happened to work out at our regular time.  Another nickname gained so many syllables and variations I can’t even remember them all; this was one of the mean ones.
We named people with songs in mind.  One particular singer had a nickname inappropriate for this blog that happened to fit with the horn line from “CC Rider,” the song of Elvis fame.  She is one of the few who knows her nickname and appreciates the humor.  There is another appropriately called “Brick House,” also after the song.  We had a nickname for another girl which paired with the song Good-Night Ladies; there were many versions of that song, one meaner than the next. 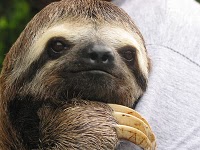 Some were named after their style - GQ - some because they happened to sound like a character from a movie - Inigo Montoya.  Others because of how they played their instrument - Three Legged Horse - or how they talked - Three Toed Sloth/Chewbacca.
We got so excited about nicknames at one point that we decided to develop a ceremony for our music fraternity granting nicknames to each of our pledges.  Of course, in true college fraternity spirit, we followed the ceremony with a party.  I remember one guy not appreciating what his nickname implied - Playboy (which he was not) - and asked to be changed; we agreed, dubbing him Colgate instead, which fits him much better (he was a handsome guy with a great smile).  At one point, we gave two disagreeing factions within the fraternity nicknames.  My side was the appropriately named Freedom Fighters, while the other was the Taliban.  Mind you, this was in 2000, before the general US population had really become aware of the struggle in Afghanistan - we were very knowledgeable about the world.
We nicknamed couples through combinations of their names.  Some were good ones - Rollsey (married), Stadria (married), and Samfransisco (me and Samantha, definitely married).  Others not so much (leaving them out to not dredge up uncomfortable memories).
We had The Board, Mr. Fitness, Archie, The Red Rocket/The Cannon, there were the Gruesome Twosome and Two Tons of Fun, Tubby, The Rod, G-Flat (his name was Frank Sharp, or F Sharp, for which the enharmonic name is G-Flat), The Rod, Elvira, Thunderbush, Tharms, Red, and the list goes on.  Sometimes I am amazed we never ran out of names to give people.
While most of these were out of good fun, some of the people, had they ever learned of their nickname, or the origin behind it, would probably have been hurt.  In our youthful ignorance, we never paused to consider the pain we might have caused had our silliness spread beyond our group.  Amazingly enough, it never did, and I am thankful for that.
As I grow farther and farther from them, gaining perspective along the way, I have fun reflecting on college memories.  It is amazing how naive and carefree we were, unaware of the burdens our lives sometimes eagerly pile onto our shoulders.  The nice thing is I will always have the memories, those of which I am proud, and those that I am not, to keep me oriented in the right direction as I grow older.
Sincerely,
Ficalove
(Not FICA the tax - who would love that? - or Fecal-love (which is entirely gross).  This one will remain a mystery, and to those who know . . . shhhhhhhh.)
Posted by Frank Chambers at 8:30 PM