I am all for the Occupy movements, as I think we should all be.  Regardless of your political views, your economic views, or your moral views, the fact that we are witnesses to real American citizens exercising their right to free speech is exciting.  For over two centuries now, our military has fought for and defended that right across this world.  I think it is awesome to see it happening.
There is part of me that is interested in going down to the local rally to see what it is all about.  Personally, I am not invested in the message like the people demonstrating are, so I haven’t chosen to spend my time that way, but I applaud them just the same. 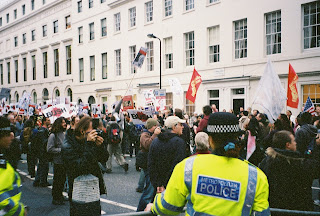 I have visited a political rally like this before, although in different circumstances.  During 2003, when I was living in London, President George W. Bush visited the UK.  Being Americans, we took an interest in our President coming to visit.  While the welcome Bush received from the government officials was nice I am sure, the welcome he would have received had he stepped into Trafalgar Square was not. 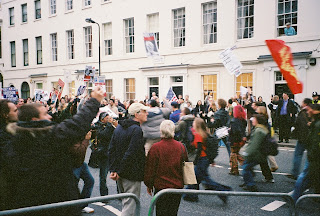 The day started with a parade, which stretched for miles through the streets of London.  The parade route ran nearby our flat, so I packed my bag and ventured out, hoping to see a little political activism of the British variety.  I threaded my way through the crowds, most of whom were young, and found a spot to stand and watch the parade right against the railing blocking off the route.  I was amazed to see who all were represented.  There were traditional Bush haters, straight-forward anti-Americans, anti-Globalists, anti-capitalists, socialists, communists, GLBT groups, anarchists, anti-Tony Blair groups, peace activists, global warming advocates, and anyone else you might imagine would make an appearance in a parade like this.
After watching for a while I decided to get some lunch.  I reached for the back of my bag to grab my iPod only to find that it had been stolen while I was watching.  How ironic that I would be watching a parade against most things America stands for, and my iPod would be stolen.  It was as if it was part of the show. 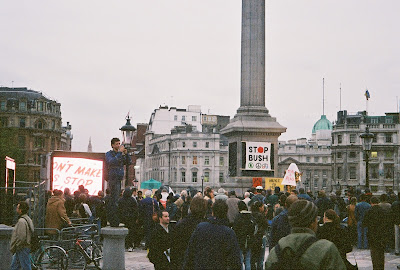 The parade eventually vomited its revelers into Trafalgar Square, sort of like London’s equivalent to Times Square in NYC, where they hung about for the rest of the day.  Massive stages had been erected on which people would deliver speeches decrying Bush and American war policies.  In one portion of the square, a giant effigy of Bush had been erected.  That night they burnt the effigy.
Passing through Trafalgar Square was only a small detour on my way to the theater from the flat, so I stopped by.  The mood was a little too excited and Bacchanal for this American, and while I was never spoken to, stopped, or even noticed, I still felt uncomfortable being there.  Needless to say, I didn’t hang about.
I still think about the parade and rally when I see demonstrations on TV.  Nowadays, it seems like peaceful rallies like this (with the exception of the burning of the Bush effigy) are always infiltrated with a few violent, dysfunctional people whose sole agenda is causing chaos.  No longer does it seem that a demonstration can simply be that, instead turning quickly from peaceful movement to riot.
I am glad to see that most of the Occupy movements have managed to maintain their peaceful nature for the most part.  The recent escalation of violence between protestors and police is a disappointing development in this truly American movement.  I hope that Occupy has not transitioned to Occupied as so many other demonstrations and rallies around the world have. 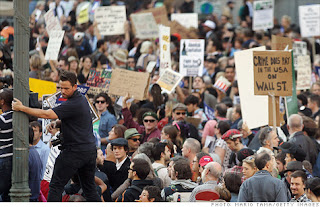 My hope is that these disenfranchised people, regardless of their individual messages, will be able to solidify and provide an agenda to present to the public.  Only through doing that will they free themselves from the infiltration of chaotic elements.  Only then will a true discussion emerge instead of today’s extremely fragmented and unguided conversation.
For those of you who disagree with the general message around which the Occupy movements are organized, I hope you can find a place in your heart to respect their right to do so.  As Voltaire is credited with saying: “I may not agree with what you say, but I will defend to the death your right to say it.”
While I certainly do not wish it to come to any sort of defending to the death, I stand behind the Occupy movement in principal and hope it can manifest the order it needs to expel all negative and violent intentions as it develops its unified voice.
Posted by Frank Chambers at 9:41 PM