I had the distinct pleasure of being a judge for the Pride of the Dutchmen Field Show in Orange City, IA.  Where?  Yes, that is right - Iowa.  Land of corn.  Land of cows.  Land of Agriculture.
Being that Orange City is not very big (nothing is in Iowa except the corn fields), the judges flew in to Souix Falls, SD, and then drove to Orange City.  Our hour and half ride gave me the opportunity to evaluate whether or not the Great Plains lived up to all of my stereotypes.  It did.  The land was rolling, flat, wind-blown, and full of crops.  I have been through West Texas many times, and what the landscape is very similar, West Texas gives the distinct impression of being empty.  Iowa gave the impression of being full to bursting; just not full of people.
The Dutchmen band director - Steve Connell - made sure we were taken care of.  We were fed the peak of Iowan cuisine, dining on steaks from Archie’s Waeside, home made deserts, an inventive variety of pizza from the Pizza Ranch, and a delightful brunch hosted at the Connell homestead.  All around, we had a good time.
I judged Visual General Effect, and while I admit, I didn’t know what to expect from bands seemingly in the middle of nowhere, I kept my mind open.  I am glad I did, because I saw some great productions from some little bands.  This was the eighth year of the Dutchman contest, and over the eight years, the contest has infected the local groups (25 were at the contest) with the design itch.  I was expecting half-cocked college imitations, but instead experienced actual productions.  It was a very pleasant disruption of my expectations.
The one comment I did find myself making to many of the bands had to do with visual phrasing.  Judging effect, whether music or visual, means consideration is given more to the design elements and whether or not those elements are being achieved through the performance.  While many of the bands began visual phrases, they failed to push through to the end of the phrase, leaving the audience feeling confused and unfinished.  Without completion, the effect is lowered, depressing their score.
I noticed the same thing this past weekend at the Lone Star Preview contest.  While not a judge, I still tend to be a fairly critical person (The Critic), and many of the bands at the contest succumbed to the same anticlimaticism (btw, I just made this word up, it was the only one that seemed to work).  Their phrases began, developed, and then fizzled.  Needless to say, I was eager for bands to finish their phrases, would probably exacerbated my excitement when some of them did. 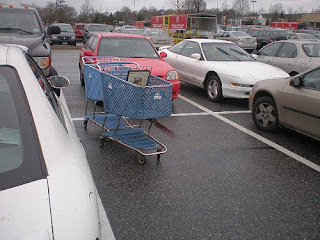 I can’t help but draw conclusions about life using this idea of finishing phrases.  Grocery stores unintentionally provide a prime surface level example of the frequent occurrence of the phenomenon.  What am I talking about?  Shopping carts.  Oh . . .My . . . God.  If there is one place I can expect my blood pressure to shoot through the roof, it is the parking lot of a grocery store.  I can’t stand to see people push their cart full of groceries to their car, unload it, and leave it tucked against a curb, in between the cars, or just floating in the parking space next to their car.  I am frequently amazed at the display of laziness and the loathing to walk the extra 20 feet to return the cart to the store or the strategically placed bins in the lot.  Wow.  Rant done.
This is an example of general humanity not finishing a phrase.  There is a certain shape to the phrase of a shopping cart.  Pick it up at the front of the store, fill it with groceries, empty it at the car, replace it in the designated bin or back at the front of the store.  With out the final step we don’t complete the phrase.  It would be like not finishing this
I am confident that all of us have succumbed to the ease of not seeing a phrase completed at some point in our life.  Sometimes, finishing the phrase is difficult, so instead, we leave off.  One of my good friends recently returned to Houston from New York City, and while it would have been easier to return with his wife and daughter two months earlier, he chose not to.  Why?  He finished the phrase, completing his time with his company instead of cutting it short.  I applaud his resilience.
I know I have left projects unfinished, apologies incomplete, ideas fragmented and hanging onto their penultimate chords, never resolving (I have never left a shopping cart, though).  Do I need to go back and resolve them all?  Not necessarily. 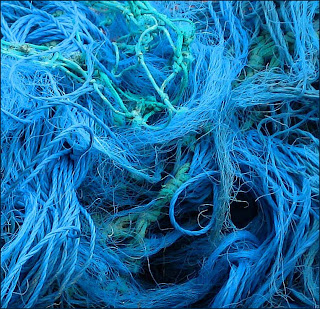 I think it is smart to tie up the loose ends of our past that we can.  When we abandon a phrase, we sometimes leave them accessible and sometimes not.  I think it is a good idea to evaluate our history to see where we might have jumped ship before we arrived at our destination.  Figure out what resolutions are possible and advance towards them.  For those phrases to which we can never return, accept them and let go without allowing them to become an anchor.
As always, use previous experience as a learning opportunity, a teachable moment, to help propel you into your present.  Adapt to your new experiences so you can finish your phrases.  If you find yourself repeating the same phrases again, learn how to finish them this time around - maybe you won’t have to repeat them anymore.
On my judging tapes, I never once asked the band directors to revisit the same show the next year, but this time design a finish to their visual phrases.  Instead, I urged them to fix what they could with the time they had left in their season, offering some suggestions on how.  I also advised them to make sure future design considered the pacing of their phrases, developing them towards their completion.  Using this year’s experience to better next year’s results means their programs are heading in the right direction.

The same can be said about us.  Finish those phrases.
Posted by Frank Chambers at 11:09 AM