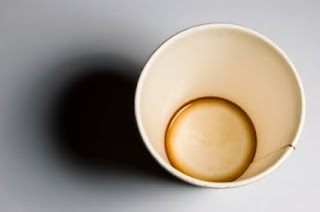 Eyes opening sluggishly.  Movements slow.  Early afternoon headaches and falling asleep by 7pm.  Never quite on edge, but trending towards crabby.  Cravings so insistent the playful combination of bitter and sweet flavors actually dances along the crenelated surface of my salivating tongue, though the warm liquid responsible for delivering such homey comfort is unfortunately absent.

This is how the Lenten season began for me.
I am not by nature a religious person.  I feel no spiritual obligation to participate in Lent, though invariably I jump on the bandwagon every year.  As odd as it may seem, I find a certain attractiveness in depriving myself of anything towards which I have an uncomfortable fondness for forty days.  Last year was meat, and though I didn’t reflect the reason in my blog Meatless, Lent was the trigger that allowed me to abandon it.  Well, for six months or so.
My decision to test my functionality caffeine-free was actually pretty easy.  I questioned my behaviors and habits, and settled on the one that seemed the most addictive and the hardest to kick.  Caffeine was obvious, as most other private music teachers will attest.

My last caffeinated beverage was Tuesday afternoon courtesy of Starbucks (surprise!).  Using my free coffee card earned by way of addiction, I went big, ordering a Quad Venti Soy Caramel Macchiato.  For those of you unfamiliar with the hot, sweet, goodness delicately balanced by the Bux baristas, this is an espresso (not pronounced with an “x”) drink layered for a tiered flavor profile.  A well made Caramel Macchiato will delight your buds with a tunnel of flavor, the warm (soy) milky center, flavored with vanilla and caramel, passing through the bitter espresso until it reaches your waiting tongue.  Usually a Venti is made with two shots.  I had four.  Sort of a Bon Voyage to Caffeine.
Needless to say, Wednesday was rough.  Thankfully, my teaching day on Wednesdays doesn’t begin until 11am, so I had the opportunity to stretch the alarm that morning.  When I arrived at the school of the day, I didn’t recognize the kids on the stage.
Uhoh.

These kids are on a rotating block schedule.  They have four classes every other day.  Today wasn’t my day to teach them; the day before was.  A Monday holiday threw a kink in my schedule, and I hadn’t caught it.  I felt like standing on the edge of the stage, fists shaking in the air, yelling “KHHHHAAAAAANNNN!”
Oh well.  The beginning of a glorious Lenten season can not be ruined so easily.  Feeling thoroughly chastised by the universe for missing a day of lessons, I went the one place I would feel better - Starbucks.
To tell the truth, I was invited.  Samantha was already there, doing some Mary Kay business, and we had already planned to meet at a different Starbucks on one of my breaks later in the day, so it wasn’t as bad as I make it sound.  I ordered a decaf Latte for her and a Iced Passion Tea for myself - it is the only decaf iced tea, and it was warm out.  The headache started a little later.  Then the fatigue, which quickly turned to exhaustion.
Thursday was no better, especially since I taught 18 lessons between 7:45am and 7:00pm.  I survived on the eager hope I would make 39 more days, combined with the gentle placebo affect of a decaf (yes, I know there is a tiny amount of caffeine in decaf, but for all intensive purposes it is negligible - it would be like trying to get drunk on non-alcoholic beer).  The placebo effect ended as soon as my cup was dry. 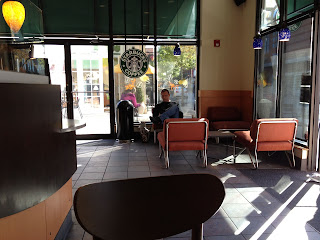 Now, Sunday morning, sitting in the inviting environment of my usual Bux, Led Zeppelin radio on Pandora.com, I feel semi-normal.  My body hasn’t always relied on caffeine to stay alert, and I look forward to rediscovering early morning wakefulness without plugging my veins into a percolator.
The challenge of giving something, even if it is only for a limited time, is a tough one.  The longer the habit has to develop, the more effort the dislodging process takes.  My coffee habit began only a few years ago as a result of the energy drain of marching band season.  It cemented itself that spring.
I know a few years is nothing compared to some people’s caffeine habits.  I imagine my struggles are just a microcosm of the immense struggle it would take for a true addict to kick the habit.  But, at least for my experience, I like to know I can choose to go without something if I make the decision.  All it takes is one second at a time.  Those seconds add up to minutes, hours, days, and weeks.  Finally, at least for me, it will total 40 days, and if I choose, Lady Caffeine can be mine again.