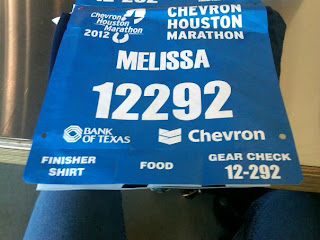 Runners by the thousands descended on downtown Houston today for the running of the Houston Marathon.  All kinds of people braved the cold morning to get this years chance to conquer the course.  Of course, to get to the starting line, each and every one of them had to conquer something else first - themselves.

For the amateur runner, the decision to run 26.2 miles is not an easy one.  There is a large leap between running three miles as a fitness routine and swallowing the twenty-six week training period that typically precedes running a full marathon.  Many people start the training and never finish, succumbing to injuries or excuses.
I trained for the marathon a few years ago but failed to make it to the starting line due to a knee injury.  While I was disappointed not to have to opportunity to participate, I still learned much about myself.  Without the guts to jump into the training process in June, I wouldn’t be able to say that I have run sixteen miles straight.  Apparently, sixteen was my limit, because after that last run, my right knee wouldn’t even let me go one mile before the pain was so much I couldn’t even walk.
I have since recovered from my injury, but have consistently succumbed to the other reason runners don’t compete - excuses.  I have experienced the excitement of following the race on my bike though, and while I definitely didn’t feel the joy of success at the end of the run, I did enjoy myself. 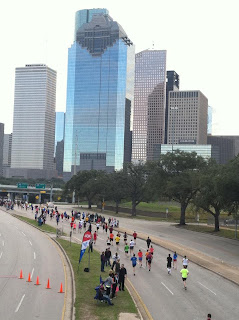 The runners in a marathon are all types - professional, amateur, recreational, exhibitionist, etc.  Some are running for causes, having raised money for a charity.  Others run for themselves, eagerly desiring the 26.2 sticker they can add to the back of their car.  While following the marathon on the bike, I saw people wearing normal running clothes, bathing suits, trash bags, and even a statue of liberty costume.  Like I said - all types.
At one point, our friends running the race texted “need advil.”  We raced to the nearest drug store and bought a bottle, then tracked them down north of the Galleria and delivered the goods.  After they ran off, we offered the advil to the other runners passing by.  It didn’t last long, eager hands grasping at the tiny pills.  Later we did the same with a tray of Oreo cookies.
Running a long race like this teaches you a lot about yourself.  Over the course of the training period, you run hundreds of miles, and unless you have a partner or a running group, much of it is spent on your own.  Some people get lost in their iPod, others in their own mind.  I ran without music, listening to what my body had to say, making adjustments as I went.
Steady activity like this is a lot like meditation.  Rhythmic breathing, steady footfalls, conscious awareness of your body, your mind, and your surroundings, all contribute to a meditative state.  The results of long distance running are similar to practicing yoga, producing states of a gentle euphoria along with an intense knowledge of self. 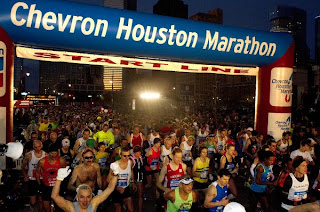 I applaud the runners today for their dedication to their goal and to themselves.  Persevering over such a long time is difficult, and your race today is tribute to both your strength as a runner and as a human.  Congratulations on both your physical and mental resolve.
Some of us might be involved in marathons of our own without ever running a single step.  Remember, just like the runners today, if you believe in yourself and never quit, you can feel the exhilaration of conquering your goal as well.