Wildflowers, Flip-flops, and the GOP I am wearing shorts today. I wore them yesterday and the day before.  I also wore flip-flops, which in Hawaii are called slippers.  Is it really January?

Dropping Samantha off at church this morning, I noticed a field full of blooming wildflowers, their bright colors a refreshing contrast to the typicaly bleak Houston winter.  But, they are spring bloomers.  Isn’t it January?
The GOP field had yet another debate last night.  Again, it was touted to be Mitt Romney vs. the Un-Romneys, but ended up as yet another fight to be the Un-Romney of the week.  The fervor of the election cycle ramped up early this year, begging the question - is it November?  I thought it was January?
The major difference between warm weather, wild flowers, and wily political banter?  I will never tire of the first two.
I am surprised the political handlers of the GOP have allowed so many debates.  Gearing up so early creates voter fatigue, generating future disinterest in the political process when it actually matters.  Can they really imagine the typical voter continuing to welcome the GOP candidates into their living rooms for another nine primary debates.  Thank God the first Presidential debate won’t be until October 3 - we will enjoy a blessed seven month reprieve from the debates.
Perhaps I misjudge the differences between flowers, nice temperatures, and stuffy politicians.  Maybe I should search for similarities.
The longer the warm weather persists, the more opportunity people have to dress in lighter, more revealing clothing.  Shorts make an appearance; tank-tops, t-shirts, skirts, and the afore mentioned flip-flops emerge from winter storage to show some skin out in public.  The same happens with the GOP candidates.  The longer they show their face on TV, the longer their blurbs are featured on the internet, and the more debates they have, the more we get to know them.  Just like warm-weather influences the length of hemlines, the more we get to see what these candidates are hiding.  Perhaps this is the reason we have enjoyed seeing the cycle of Un-Romney’s parade across the GOP’s favor.  After a little time in the spotlight, we see more of the candidates than we wanted to. 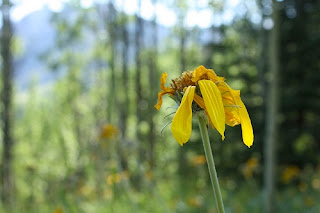 When compared to the beauty of wildflowers, I balk at finding an accurate comparison with the current crop of GOP candidates.  While their personalities are sometimes as colorful as a field of blooms, I have a feeling few parents would be comfortable photographing their children sitting in the midst of the GOP field.  The biggest similarity between the GOP candidates and these early blooming wildflowers can be drawn to their longevity.  The earlier they come out, the sooner they wilt, their flowers losing color and falling to the earth, becoming fodder for the next crop to emerge.
The only real conclusions I can draw on this early January day are ones that suggest my joy at finding unseasonable warmth and an early splash of color will soon be extinguished.  Unfortunately, I will only be left to survive the grey Houston winter with the warmth of knowing that when the flowers return for real, accompanied by clear skies and comfortable temperatures, the GOP field will be gone, leaving in their place only one candidate.  Maybe the election cycle will take a break.  Probably not though, but, at least it will be nice enough to go outside and avoid the craziness that is this current election cycle.
Frank Chambers
Follow @fxcIV
Posted by Frank Chambers at 11:41 AM